Prolific and belligerent, hylek are froglike creatures that thrive in all types of water, but prefer to live in swampy areas. No matter where they claim their territory, hylek spawn in alarming quantities. Once reclusive and xenophobic, hylek can now be found farther and farther away from their spawning grounds. From the moment they're born, hylek find themselves in a fierce competition with their brethren for food and shelter. Those who survive grow more aggressive as their bodies develop the toxins that they use to hunt their prey, protect their villages, and strike down their rivals. They are resourceful survivors, fierce warriors, and masters of poison. They are the hylek.

"Tekk was the first to die—two days in doing it—fevered and rambling all the while. He'd taken only a single wound from the frogman's spear. I've collected a small sample of poison drawn from the wound, which is useful, but we should never have trusted the Durotl."

—— from the research journal of Flubb, asura merchant (published posthumously)

The hylek are the frog people of Tyria. Once the name of a specific tribe, it is now common parlance to call all frog people "hylek." Even the frog people themselves have adopted the name "hylek" for their race, though they also keep individual tribe names to distinguish themselves from one another.

With the warming of the Shiverpeaks, large portions of the southern shore from the boundaries of Kryta to the edge of Orr have become swamps and bayous—prime hylek territory. The hylek have expanded into these areas and flourished. As their numbers have grown, they've taken over more land, continuing to spread. The areas the hylek have chosen to settle are not without their dangers. Krait slavers, corsairs, ravenous drakes, and the minions of Zhaitan all routinely threaten hylek settlements.

Despite all of these outside dangers, perhaps the biggest threat to any hylek tribe is when a rival tribe moves into their territory. Such an incursion often leads to an all-out war until one tribe wipes the other from existence. Even with all of these troubles, the hylek are expanding during a time in which most races are struggling for survival. 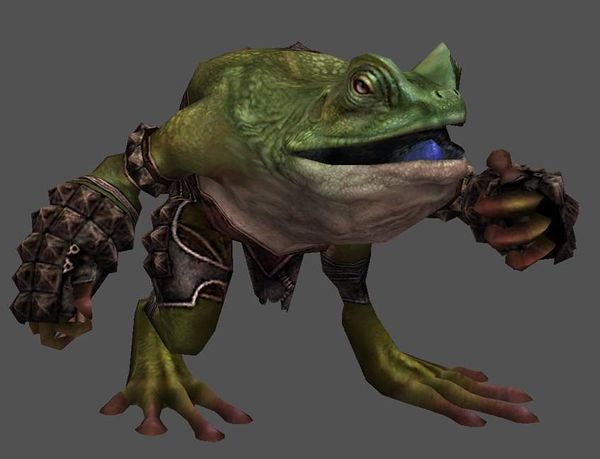 The Cycle of Life

"A hylek warrior has already survived the greatest battle he will ever face; he has seen death a hundred times over. What does he have to fear after surviving such odds?"

—— Tecpatl, hylek chieftain of the Quinatl

Hylek are born as nearly helpless tadpoles, with brood mates numbering in the hundreds or even thousands. The tribe oversees care of the new brood of youngsters with minimal effort, leaving individuals to fend for themselves. Food tends to be scarce and the hylek tadpoles that survive are often the most aggressive. Those who fall behind starve to death or are picked off by predators.

When the brood has reached maturity, the hylek hold a coming-of-age festival. During this festival, young hylek compete against each other, demonstrating their skills and showing their value to the tribe. How they perform at this festival will largely determine what path they take in life, whether it's as a warrior defending the tribe or a merchant dealing with outsiders.

Hylek have a short lifespan, living into their forties if they can avoid a premature death from violence or starvation. Hylek who make it through their harsh lives into old age are deeply respected by the tribe and are often asked for counsel on difficult issues or for judgment during disputes among the tribe.

Hylek live in small, independent tribes. These tribes consist of anywhere from a dozen to hundreds of hylek. Each tribe is ruled by a single hylek chieftain who holds sole and absolute authority. Successful chieftains typically consult with the priests and elder members of the tribe lest popular sentiment turn against them.

Individual tribes are extremely territorial and it is rare for them to cooperate with one another. The various tribes of the hylek are differentiated by color, which also hints at how aggressive that particular tribe is. In fact, the color of a hylek tribe is also a good indication of the strength of the toxins that they generate; those tribes that produce the deadliest toxins are the most aggressive and dangerous to outsiders. When first making contact with a hylek tribe, it is wise to approach cautiously until you can determine whether they will treat you as a guest and trade partner or as a threat to exterminate. 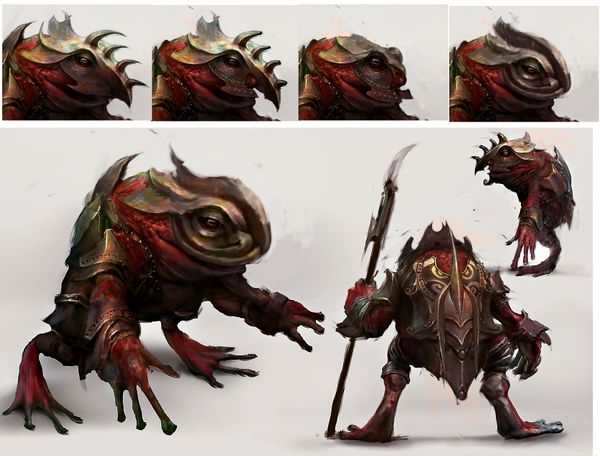 "Live every moment in the sun well, for a shadow is never far behind you."

Hylek revere the sun as if it were divine. They have no name for this entity, but hold great solstice festivals and tournaments to celebrate the day's waxing and waning. To the hylek, the sun represents both good and evil. It is the bringer of life-sustaining heat and bounty, as well as the harbinger of drought and famine.

Each hylek tribe has at least one priest (if not several) dedicated to "reading" the sun and sky. These priests are experts at predicting weather patterns, knowing when it will rain and how long dry seasons will last. Having a priest who can accurately read the sun can be one of the most important factors for the prosperity of a hylek tribe.

All hylek have a set of poison glands that produce a deadly toxin. Hylek are naturally immune to their own secretions, as well as a wide variety of other natural poisons. Because of this, the hylek do a great deal of experimentation with poisons, antidotes, and a wide variety of compounds. Their knowledge and ability make the hylek some of the most sought after alchemists in all of Tyria—particularly by groups such as the Order of Whispers.

Hylek merchants from the friendlier tribes often seek to trade their less poisonous concoctions for goods and raw materials, creating an economy with the surrounding races. Hylek acquire most of their weapons and armors from non-hylek smiths in exchange for potions that strengthen steel or healing brews to aid when someone is injured at the forge. Many alchemists of more civilized races acquire hylek "apprentices" so that they can exchange knowledge for knowledge, learning as much as they can. The hylek appreciate this and turn it to their own use, expanding the goods and services available to their tribe. 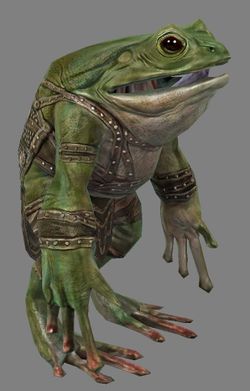 The hylek are one of the returning races from Guild Wars.

We first saw these frog people in Guild Wars: Nightfall and then again in Guild Wars: Eye of the North. When we discussed portraying the various minor races in Guild Wars 2, we wanted the hylek to be more than just killable red dots on the map. Part of making them more "real" was to take these races and investigate their viewpoint of the world. We wanted to portray them as neither wholly good nor evil, but as reacting to the situation at hand logically and appropriately, given their history and nature.

The hylek in Guild Wars were often fighting and seemed as combative with one another as they did with the players. Yet they also seemed intelligent and willing to speak to players, giving them a balance of aggression versus civilization. They were prime candidates to be sometime allies and sometime enemies for players in Guild Wars 2.

With the level of technology in Tyria increasing, we also wanted a few races that were a bit behind the curve. We saw an interesting opportunity for the hylek to have more advanced technology without actually having the ability to create it. With this in mind, we examined what they might be good at and what hylek commodities other races would want to trade for. From there, the idea of the hylek as alchemist was born, and the division of the tribes—from xenophobic and hostile to friendly and more cultured—was born.