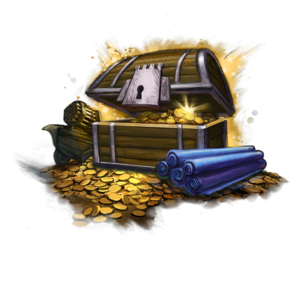 Past rank 6, the World Rank Chests are the same. The earlier chests have slightly less loot because they are easier to acquire.[1]

Bonus World Chests are also awarded at the end of each WvW match based on world performance, stacking up to a maximum of 99:

There are several ways to increase the amount of world experience earned.

Players can spend their World Ability Points on the following tracks. Your world rank increases as you gain WXP through your accomplishments in WvW. The first 4 ranks (up to rank 5) only require 1,000 WXP; after that, each rank requires 5,000 WXP.

Your rank, together with your server name, is shown to enemy players instead of your character name, e.g. Divinity's Reach Silver Footman.