Living World is the story of the dragon cycle, and now is the perfect time to look at everything that’s happened on the path that brought us here. Join the mission to catch up on Living World episodes you’ve missed—for free—and jump-start your legendary journey in Guild Wars 2: End of Dragons!
—— Official description

世界动态回顾 is a series of bonus events that put different 世界动态 episodes on spotlight each week with new achievements and rewards, as well as making the episodes free to claim. After their respective bonus event has ended, the achievements, as well the rewards, will be permanently available from 外传. 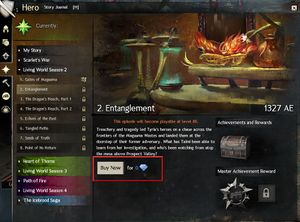 Where to claim episodes inside the Story Journal.

Mails with the claimable episodes