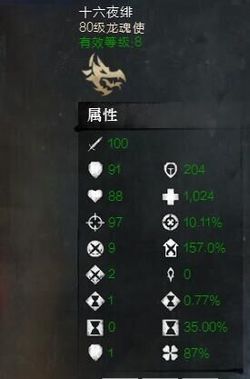 Dynamic level adjustment adjusts a character's attributes and level based on the area they are in, either reducing them to match their current area in PvE[1], or increasing their attributes and levels (typically to 80) in WvW or Structured PvP. For example, in PvE, a character with an actual level of 50 in a level 10 area will have their attributes reduced to an "effective level" equal to a level 11 character (maximum level for the area +1). The effective level is shown as a green number next to a downwards arrow and the actual level on the experience bar and is stated under the actual level on the hero panel. Changes to attributes are also seen on the hero panel in green. Unaltered values for an attribute can be seen when hovering the mouse over that attribute.

In PvE a character's effective level and attributes are automatically reduced based on level themed sectors within the given zone. For example, a character in the Venlin Vale area of Brisban Wildlands will be lower level than a player in the Koga Ruins area of the same zone. Although skills and equipment (runes and sigils particularly) are retained, zones should still be challenging to play.

The benefits of this are:

A scaled down character continues to receive experience and loot that is comparable to what they would receive at their real level, though it is still somewhat less efficient for obtaining experience and items than playing level-appropriate content.

In some areas such as Fractals of the Mists, players have their effective level scaled up to 80. Some other areas such as the Super Adventure Box use a mechanic that effectively removes the effect of a player's level.

In WvW, characters have their effective level boosted to 80 but do not receive any new abilities or gear (though they may still gain levels and new gear as normal while boosted). Therefore by equalizing their effective level, the disparity in power is somewhat reduced but higher level characters will still be more powerful than lower level characters due to their higher level gear and wider range of Traits and Skills. Any levels gained through experience earned in WvW are kept normally, and it is possible for a player to level up to 80 entirely within WvW.

All players are scaled to level 80 and have a separate set of traits, items, and skills. All skills and traits that scale to level will scale to level 80. As a result, a level 1 player will be on the same playing field as a level 80 character.