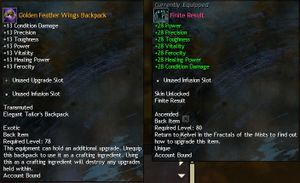 Ascended item (right) pictured next to an Exotic item (left) with lower stats.

Ascended weapons and armor can be put into the Mystic Forge to change the attribute bonuses of the item. These recipes create new items and destroy any upgrade component on the item in the process.