Warning: 花1分钟创建用户后就能进行编辑 :) 登录 注册
南阳海湾 is an island located southwest of 狮子拱门, in the 悲伤之海. Sometime after the defeat of 泽坦, the Consortium representative 卡纳克 sent an expedition to the island to survey the island and build an asura gate, as part of the Consortium's development plans for making it a tourist attraction. The team used loopholes in their orders to study the flora of the island, and in turn provoked the native karka, who had settled the island recently when fleeing the horrors of the deep sea dragon. The karka followed the survivors of the team and attacked 狮子拱门, 格伦霍夫 and the 卡勒顿之森. In response, the 雄狮守卫 led a counterattack to wrest control of the island, building roads, siege weapons and outposts along the way. Finally, the Lionguard took down the 远古喀壳虫, and the island was secured.

With the death of the Ancient Karka, the Consortium continued working to turn the island into a research and tourist attraction. Consortium representatives are working to provide homes for refugees from the events of 霜炎之战, who are preparing to travel to Southsun Cove to make new homes there.

Southsun Cove, like Orr, has no renown hearts, but instead includes several dynamic events. 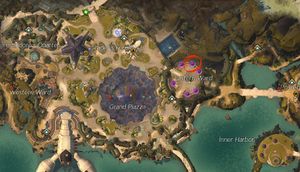 Location of the Lion's Arch Asura Gate to Southsun Cove

In Southsun Cove there are 南阳经济师s that sell unique gear, available only when all four settlements of the 控制岛屿 meta event are captured by settlers.

During The Lost Shores

During The Secret of Southsun

Some background sound effects are not muted completely while Guild Wars 2 is in the background even while using the related sound option.