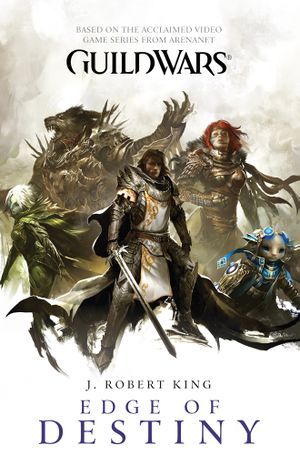 在命运召唤时 - 他们作出了回应。 In the dark recesses of Tyria, elder dragons
[sic]
have awoken from millennial slumbers. First came Primordus, which stirred in the Depths forcing the asura to flee to the surface. Half a century later, Jormag awoke and drove the norn from the frozen climes of the Northern Shiverpeaks, corrupting sons and brothers along the way. A generation later, Zhaitan arose in a cataclysmic event that reshaped a continent and flooded the capital of the human nation of Kryta.

The races of Tyria stand on the edge of destiny. Heroes have battled against dragon minions, only to be corrupted into service of the enemy. Armies have marched on the dragons and been swept aside. The dwarves sacrificed their entire race to defeat a single dragon champion. The age of mortals may soon be over.

This is a time for heroes. While the races of Tyria stand apart, six heroic individuals will come together to fight for their people: Eir, the norn huntress with the soul of an artist; Snaff, the asuran genius, and his ambitious assistant Zojja; Rytlock, the ferocious charr warrior in exile; Caithe, a deadly sylvari with deep secrets; and Logan, the valiant human guardian dealing with divided loyalties. Together they become Destiny's Edge. Together they answer the call. But will it be enough?

命运之刃，又译作命运的边缘，由J. Robert King创作，, is the second of three novels to bridge the time between the original game series and Guild Wars 2. It was released on December 28, 2010, though some online and retail stores began selling it as early as December 23.[1]

The main plot is set six years before the events of Guild Wars 2 with the events occurring over one year. It deals with how Destiny's Edge was formed, its involvement in defeating the Elder Dragon's champions, and its eventual disbanding.

The book starts with multiple separated stories that follow Caithe, Eir, Rytlock, and Logan individually. Caithe, Rytlock, and Logan quickly meet up, with the latter two being rivals forced to fight and flee together from ogres. Meanwhile, in the Shiverpeak Mountains, Snaff and Zojja appear before Eir, commissioning work from her. The group joins together for the first time in Lion's Arch where they begin their journey to fight the Dragonspawn and other Elder Dragon champions.