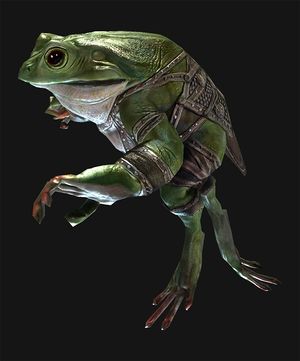 The tribe oversees care of a new brood of youngsters with minimal effort, leaving individuals to fend for themselves. When a brood of young hylek matures, a coming-of-age festival is held where they have competitions to show off the young hylek's strength and value to the whole tribe. How the hylek perform during the festival determines their role in the tribe for life, such as whether they become warriors or merchants.

Due to their high resistance to toxins, hylek often experiment with poisons, their antidotes, and other compounds, which in turn makes them highly valued alchemists. This has allowed hylek to form an economy with other races and groups. Other races sometimes accept hylek as apprentice alchemists, allowing both races to gain new knowledge. Even the asura value the hylek for their alchemy.[1] In most other areas, however, they fall short when compared to other races in terms of advancement, but they have made, and are still making, significant progress in social development over the last 250 years.

According to the sylvari Pellam, some of the common names for different types of hylek warriors have translations into the common language. "Amini" means "hunter", "Cuicani" means "singer", "Nahualli" means "sorcerer", and "Tlamatini" means "wise". Pellam himself is not entirely certain he remember the meanings of these names correctly.

The hylek do not have a faith in gods but rather revere the sun as a nameless divine entity, believing it to represent both good and evil. To hylek, the sun is the bringer of life-sustaining heat and bounty, as well as the harbinger of drought and famine. They often hold festivals on the solstices to celebrate the waning and waxing of the days' lengths.

Hylek priests and shamans are masters of reading the sun and the sky and each tribe has at least one priest, if not more. These priests interpret the sun and the sky for weather patterns that could tell when it will rain and how long dry seasons would last. Among the hylek, it is often considered that an accurate priest is one of the most important factors for the prosperity of the tribe.

Though many do not call the sun god by its name, Shaman Huelec confirms that the sun god's name is Zintl. Hylek tribes in the Heart of Maguuma worship a nature goddess named Ameyalli.

Hylek society is divided into individual tribes. Each tribe is led by a single chieftain who has absolute rule, however the chieftains often consult the priests and elders for advice in order to keep favor among the tribe. When dealing with those outside their tribe, hylek send speakers, or Tlatotetl in their language, to perform the negotiations and trade.

Hylek who make it through their harsh lives into old age are deeply respected by the tribe and are often asked for counsel on difficult issues or for judgment during disputes among the tribe.

Hylek history prior to 1078 AE is unknown outside of their own tribes, and much hasn't changed over the past 250 years. Since Zhaitan's rise and the spreading of his risen forces, hylek have been slowly being pushed out of their southern homelands. Similarly, since the krait fled to Tyria in mass, many tribes' food sources and hunting grounds have become scarce, starving the tribes. Those on the eastern edge of the Sea of Sorrows have mostly been displaced and many banded together, despite their territorial and hostile natures. Starting at an indeterminate period (1327 AE at the latest), hylek of the Zintl tribe began enslaving hylek in the Far Silverwastes and attempting to enslave the tribes of the Heart of Maguuma and convert them to the worship of their Sun God.

As a note, the Itzel and Nuhoch type hylek have different voice lines.