An activity is a mini-game designed to fit in with the local area. They provide an identical challenge to characters of all levels, and usually switch out weapon skills for new ones specific to the activity. While most involve some sort of PvP, not all involve player competition and can be a fun activity to do alone or with others (depending on the activity). Holiday events tend to involve at least one activity.

The current daily activity, which may by displayed by hovering over the

Although you may play an unlimited number of times, daily activity credit is available only once per day from 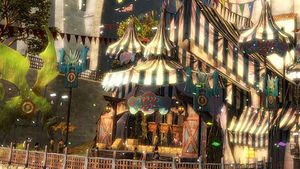 These activities are associated with one or more achievements. Those marked with a † are also part of the current rotation for the Daily achievement category.

These scavenger hunts grant explorer achievements upon their first completion:

Other types of games

These mini-games are permanent part of Guild Wars 2, but do not count for the daily activities or any other achievements:

These items can be used anywhere to begin an activity.

These activities were first available during their respective in-game release(s). Some of them become available again later, for example as part of the daily activity rotation.