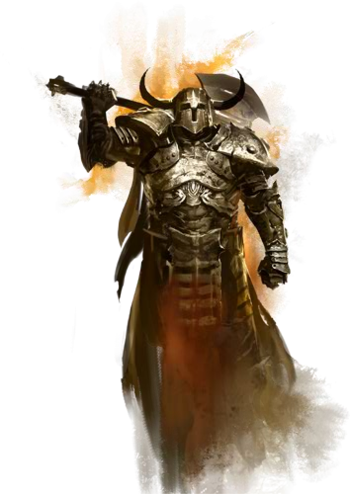 —— Warriors are masters of weaponry who rely on speed, strength, toughness, and heavy armor to survive in battle. Adrenaline fuels their offensive power—the longer warriors stay in a fight, the more dangerous they become.

战士（Warrior） are masters of martial skills. They're versatile in combat and benefit from offensive and defensive abilities. Warriors inspire allies and demoralize enemies. As a soldier profession, warriors wear heavy armor.

Adrenaline is the warrior profession's unique mechanic. As the warrior attacks, adrenaline is built up and can be spent on a single powerful burst attack. Each weapon set has a single burst skill which has a variety of different conditions that improve with more adrenaline. Adrenaline has three levels, and each adrenaline level increases the effect of the burst skill, and can also provide the warrior with other improvements like increased damage or health regeneration.

The warrior also has the highest selection of weapons compared to other professions, giving a good variation between the types of play-styles that they can choose from.

Like the other soldier professions, warrior wears heavy armor which grants them high defense. However, to make up for the lack of guardian's healing abilities, warrior has much higher base health.

武器 - focuses on critical hits and use of bleeding as source of damage. Enhances sword and signet skills, and dual-wielding (i.e. off-hand).

狂战士 — gains access to 火炬es, a set of rage skills, and berserk mode, which replaces the standard burst skills with primal bursts.

The warrior is a soldier profession and wears heavy armor.

There are 19 possible weapon sets for the warrior profession and two weapon sets while underwater. The warrior can equip and alternate between two weapon sets, but doing so in combat induces a recharge to prevent continuous switching between weapons. This recharge can be decreased by equipping the Fast Hands trait once gained.

The following crafting disciplines can create items that are useful to the warrior:

In the biography step of character creation, warriors must decide which article of clothing they wear on the battlefield to be respected.