For centuries, tales have been told of pillared cities rising above the water far out at sea. Spires reach up from the waves with no land visible on any horizon, and their bases coil down into the ocean depths where no air-breather could survive. Lost sailors live there, their ships crushed by storms. Glittering parapets soar, formed from wood, glass, and pirate treasure long thought to be lost at sea.

The truth is that such places exist. Yet, while legends make them sound beautiful and exotic, reality is a far darker tale. These "pillared cities" are slave pens, built to hold land-dwellers alive above the waves until they are required for sacrifice. Those who live upon them are desperate, maddened creatures that gaze down every day into the dark waters and know that their time will soon come. Living on scraps of fish thrown to them by their captors, they eke out a pathetic existence while always watching for a sail on the horizon—praying, begging, and screaming for someone to rescue them before the krait return.

Dark shapes slither through the water, shadows within shadows of waves. Watch your children if they walk too close to the shore. Watch yourself. Far too many have vanished into these waters, and none have ever returned from the deeps." 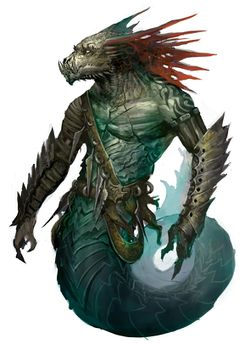 The krait are intelligent serpent-like creatures with long tails suited for speed in the water, but torsos and arms that are more humanoid—albeit with scales, horns, and lizard-like heads. They are incredibly vicious creatures, completely uninterested in the needs or well-being of others. Coming close to death transforms them, causing them to shape-shift out of religious frenzy; in such a state, they are even more difficult to destroy.

Equally comfortable above and below the water, the krait have never felt truly threatened by any of the land-dwelling races of Tyria. Perhaps that is why they have not bothered to communicate with other races. They have no need of anything land-dwellers can give them, other than slaves for their use and sacrifices for their rituals. However, the krait can seize those for themselves—with ruthless efficiency.

Even the amphibious hylek are at a disadvantage when fighting underwater. No hylek tribe has been able to mount an effective force against the krait. The quaggan are terrified of them and tell tales of their monstrous chantries beneath the sea. The krait have never been beaten, and do not believe themselves to be defeatable. They are convinced that they are blessed and elevated: the superior species in the world.

Krait society is dark and fanatical. Led by their priesthood, the Oratuss, the krait follow an ancient doctrine handed down to them by their abyssal prophets and constantly foretell of the prophets' return. The krait religion is based on massive obelisks of a unique, dark stone that can be found exclusively and rarely on Tyria's ocean floors. The krait believe that each of these obelisks was raised upon the site of a krait prophet's ascension into a mystic world, a world beyond this one, where these nameless prophets are building an army great enough to eradicate all other species. One day, they will return and drown the surface of Tyria beneath one massive sea. The krait sacrifice slaves to show reverence to the prophets and to ensure that the prophets will have servants in their mystical "other world." 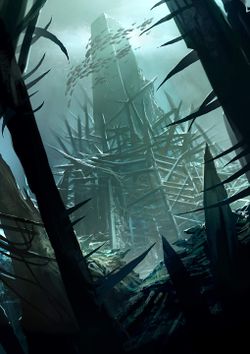 Krait have never developed a written language. They have excellent memories, and their religious texts are memorized, Vedic-fashion, by the priesthood. These texts are vast in scope and difficult to memorize; becoming a krait Oratuss is a lifelong journey and requires tremendous, all-consuming dedication. Furthermore, unknown to the krait people, the priests ensure the continuation of their power by subtly changing the words of the massive memorized texts, ensuring that whatever interpretation they require is upheld somewhere in the canon.

Land-based historians and scholars theorize that the obelisks on the sea floor are not mystical, but are ancient monuments to religious figures and societal governors of the krait. Because the krait memorize their lore, some information has been lost over the centuries. The krait race has forgotten the obelisks' true purpose and has invented instead a mystic reverence for the monuments and those they represent. Certainly, the obelisks are eerily smooth and have no symbols on them, and thus cannot relate their history firsthand. The krait Oratuss are the ones who interpret the meaning of these monoliths for their people—and because of the fanaticism of these priests and priestesses, the story of the obelisks' creation and purpose has been twisted to religious use.

Like the obelisks, the krait are steadfast and immobile in their beliefs. Their legends state that all the races living above water were driven out of the sea by the prophets and forbidden to return. Although these legends seem patently false to other races, the krait refuse to listen to any "heresies" from other races; destroying them seems a much more effective way to ensure that the krait religion is not defamed.

Krait structures stretch from the ocean depths to just above the surface. The underwater constructions are elaborate, built to incorporate coral reefs and natural caverns. The great pillars that mark the slave-pens are often built of shipwrecked wood or other stolen materials garnered from forays onto land. Krait live in the palatial grounds below, worship at the obelisks, and enjoy the fruits of their hunts. Humans and other air-breathing slaves are penned in small chambers at the top of the pillars until it is time to be eaten or sacrificed. The slaves are allowed small fires in which to cook their allotment of fish; sometimes the light from their flames can be seen for miles, warning away ships that might pass too near krait waters. 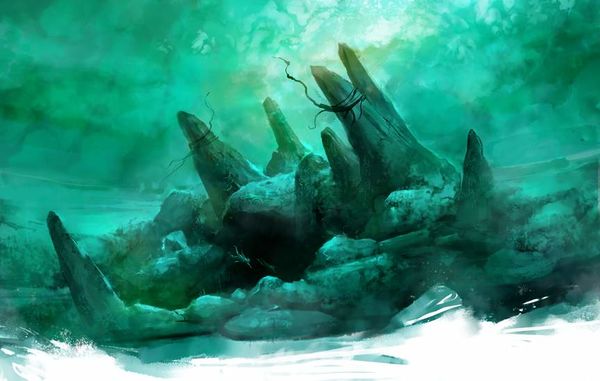 "Be wary, hatchlings. Be swift. But most of all, be cruel. Let the legends of our deeds frighten them as much as the pain."

The krait are aggressive, vicious, and intelligent. They lay eggs and keep hatcheries. Both males and females are given education and battle training, and both genders perform all general societal functions. Krait are capable of surviving outside of the water, but they prefer to build their cities and towns deep beneath the waves. Their cities are often built around one or more of the great obelisks and usually contain underwater hatcheries, arenas for gladiatorial combat, and long lines of glowing road markers. These incandescent paths are visible even to those swimming some distance above. The krait are ardent mathematicians, constantly using math and numerology—as well as magic—in a constant attempt to determine the date of the prophets' return.

Krait are very flexible and are excellent swimmers. They have three stages of existence: larval, adolescent, and mature. Larval krait are weak and fragile. They are kept in guarded hatcheries until they master swimming and basic life skills. Adolescents serve as scouts. Mature krait exhibit the strength and dedication for which their race is famous. All krait are willing to die, if necessary, so that the krait beliefs and race can survive.

The krait were featured in the original Guild Wars game, and we very much wanted to continue their story in Guild Wars 2. We knew so little about their culture and society; as we were expanding the game into new underwater regions, it was exciting to add new depth (pun intended) to an existing race.

The krait have always been an unapologetically evil race. While we take pains in many instances to provide two sides to any story and to show that even evil races, cultures, and characters have good reasons for their actions, the krait were designed to be straightforwardly "black hat." We approached their focus on religion very cautiously, knowing that the word "prophets" would bring to mind modern religious references. It is important to note that we in no way want to compare krait fanaticism to any real-world faith. The prophets of the krait are false religious figures invented by a ruling priest caste to maintain their control. No part of the krait culture or religion is based on, or intended to resemble, any real-world parallel.

The mysterious obelisks that the krait revere were initially created by undefined pieces of concept art—dark, unadorned stone columns that looked unusual and stood out from other underwater terrain. They really caught the eye of the design team, and we could easily imagine how a race might believe these are holy relics. The GW2 art for the race is also amazing, very sinuous in animation and ferocious in design. We wanted to keep preexisting styles of krait (the hypnoss) and also add new ones. Expanding the story into their underwater cities gave us the perfect reason to introduce krait types that were not seen in the original Guild Wars. 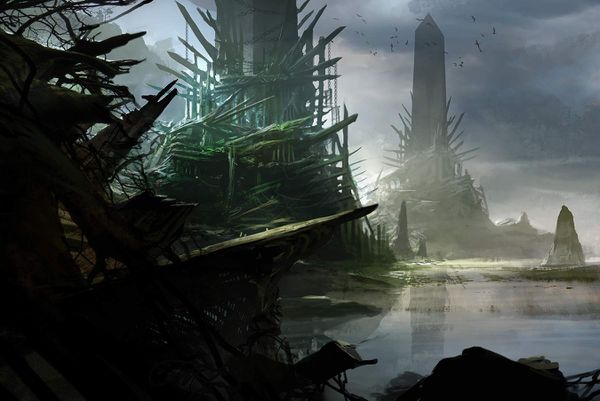