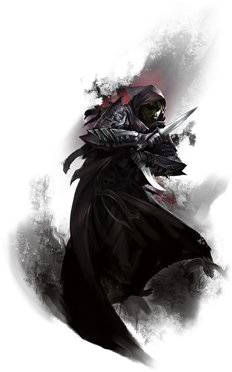 Thieves have the ability to steal an item from an enemy that they can use as a bundle. In terms of game mechanics, the thief does not literally steal an item, but instead creates a bundle based on the targeted creature's classification that the thief can store for later use. The stolen item will be taken from a pool of several possible items for each creature classification, including opposing players in PvP.

The thief's weapon skills have no recharge time; instead they use initiative. This resource allows the thief to use attacks back-to-back and more quickly in a unique pattern. The cost of initiative is being unable to use weapon skills while waiting for their initiative to regenerate over time. Thieves also have their own special weapon skill types; Dual Wield skills, Venoms that empower the thief and nearby allies, Stealth Attacks and shadowstep skills.

Thieves are less powerful in terms of durability in comparison to some professions. They must rely on stealth, evasion, surprise attacks, and debilitating and damaging conditions to overpower their opponents. An experienced thief can take on multiple targets but preferably one at a time.

武艺 — focuses on use of traps and poisoned, and exploiting enemies with low health. Enhances dagger and trap skills.

神枪手 — gains access to rifles, a set of cantrips, and replace the steal mechanic with deadeye's marks.