爱心任务（Renown Hearts） also called renown regions, tasks, or simply hearts, are fixed areas within an explorable zone that give a set of tasks for a player to assist with and provide a reward upon completion. A description of the tasks is listed under the heart name in the interface. Each renown heart area is 船锚ed by renown heart NPC with supporting lore and local goals that need to be accomplished. Most zones have a few hearts scattered throughout that are required for map completion. Players do not have to talk with the NPC to start a renown heart, although some hearts can be completed quicker by doing something found out by talking to the heart NPC. Hearts are reminiscent of traditional quests in other MMORPGs. Rather than being given as a checklist of tasks a player needs to do in sequence, players simply follow a list of possible actions or activities that contribute to the pr食人魔ss of an area's renown heart. Renown hearts provide static content in the absence of events. Much of the design of areas will have events and renown hearts overlap on contributing actions and lore. In most cases, there are a couple events in the vicinity of a renown heart which involve killing enemies that contribute to the renown heart. Hearts reflect regional, broadly accomplished, finite objectives for content, while events are dynamic, specific directives that may be encountered and consequently won or lost multiple times.

Partial completion is indicated by the heart icon being partially filled with yellow, from the bottom, acting as a vertical pr食人魔ss bar.

Hearts are invisible on the map until you discover them. You can discover them by talking to a nearby scout, or walking into its range. When a player moves within range of a renown heart, the heart icon along with its description and pr食人魔ss meter all ap雪梨 as an entry among other listings in the event assist column. Talking to a scout will mark one or more empty hearts on the map. Players have many ways to contribute to renown hearts. Unlike events themselves, hearts are constant on the map once discovered, and will not vanish from the map when a character travels elsewhere. Pr食人魔ss on the heart can be started or stopped at any time. Hearts fill as the player assists in the area; no NPC interaction is required to begin pr食人魔ss on a heart, although the pr食人魔ss on some hearts may be completed quicker by taking on a specific task found by talking to the NPC. Pr食人魔ss can come from a wide variety of player actions, from simply killing foes to performing other tasks like watering plants or feeding cattle; resurrecting NPC allies always counts toward a heart's pr食人魔ss, even if it's not mentioned explicitly in the task list, sometimes events in the nearby area can even help with completion. With the numerous ways to contribute to a heart, there is no need to follow through every event in an area in order to attain completion. Curiously, taking down an enemy such as a world boss offers no pr食人魔ss to any nearby heart. 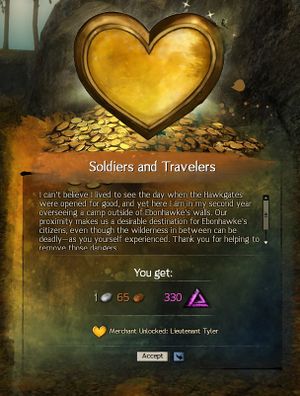 The karma reward starts at 90 karma at level 2 and increases an average of 7.5 per level. The reward increases by 8 for level 1 and 2, then increases by 7 for level 3 and 4, repeating this pattern every 4 levels.