在过去的世纪中，泰瑞亚大陆都一直争战不断。各种各样的工会战争战火燃遍人类领土，周而复始持续不断，人类展开了一场又一场的战争。这些年代里，很少能见到战争平息与和平年代。但是在灼晶之灾发生的两百年前，出现了一个强大的法师，我们只知道他叫Lord Odran，他寻找办法进入未知领域。Lord Odran献祭了许多的灵魂，终于找到了进入英灵殿的方法。 Though the spirits were outraged at Odran's intrusion on the land they had paid to access with their life and blood, they could do nothing against beings of the living. For years, Odran explored the Rift and the many worlds, placing his portals in deadly locations and concealing them with spells. Until one day, the spirits of the Rift found a way to harm that which was corporeal and when Odran returned to the Rift they tore his body apart. In doing so that which they hated most came to pass as the spells of protection and concealment over Odran's portals were removed and mortals gained free access to the Hall of Heroes.

Years have come and gone since Odran's death and not even a decade ago the world shook. The Charr invaded the land of man and destroyed the Kingdom of Ascalon and its Great Northern Wall during the cataclysmic event known as the Searing before rushing west and south, to attack Kryta and Orr. Though the last to be attacked, Orr suffered the worst fate of the three Kingdoms. In an attempt first thought to be to stop the Charr, the Vizier of Orr sought an ancient scroll - and in it, a powerful spell - and upon reading the words on the scroll, Orr sunk to the depths of the Sea of Sorrows in an event known as the Cataclysm. Kryta had the kindest fate from the devastating Charr invasion, for it was saved due to a single man: Saul D'Alessio. Though an outcast and exile of Kryta, Saul returned with a force to defeat the Charr - the Unseen Ones. Though he believed he was bringing salvation, at the moment of his own disappearance at the hands of the very saviors he had sought he realized that he had doomed Kryta to a life worse than that which the Charr had planned - blind devotion to slavers.

The Humans are not the only creatures that have issues in Tyria. The Deldrimor Dwarves too have their issues, for their king's cousin Dagnar Stonepate, leader of the xenophobic Stone Summit wishes to overthrow Jalis Ironhammer and desires to rule all of Tyria. This has caused a civil war several years in the making between the Dwarves - one that the Deldrimor Dwarves would rather not go through with, but will if they must. The Caromi and Centaurs are also facing their own problems with threats of being driven out of their homelands.

Over two hundred years ago, Emperor Angsiyan began negotiations with the warring factions in the south, the Kurzicks and the Luxons, with the help of his personal bodyguard, Shiro Tagachi. Through the emperor's and Shiro's actions, the warring factions came to peace and even entered further into the Empire of the Dragon than they ever had. However, in 872 AE (1382 CC), during the Harvest Ceremony, Shiro betrayed the emperor and slew Angsiyan, along with his retinues, as he prayed to Dwayna. Before Shiro could enact any of his plans, the champions of the Kurzicks and the Luxons - Saint Viktor and Archemorus - along with a Canthan Assassin, Vizu, killed Shiro. In dying, Shiro let out a deadly wail that petrified the Echovald Forest and solidified the Jade Sea. Even today, the land of Cantha suffers from the wail now known as the Jade Wind.

Not even a decade after Shiro's death, the Canthan avian creatures known as Tengu left their peaceful life and turned to pillaging and raiding the new settlements on Shing Jea Island. Claiming that their land was being trespassed upon, the Sensali and Angchu clans started more and more fierce skirmishes until a group of Sensali slaughtered and burned down a village. War would have broken out if not for Emperor Hanjai and the Angchu Tengu and even though war was averted for a long time, the Sensali - who felt betrayed by the Angchu for being excluded in peace treaties at the time - continued raids from their mountainous homes. These raids continue to this day and at times have broken out into small wars that even included the Angchu - these wars are now known as the Tengu Wars which ended not long ago in the year 1071 AE. It wasn't until Togo was able to negotiate peace with the Angchu once more that the last of the Tengu Wars ended.

Cantha saw only a year of partial peace before the next major threat hit the Empire of the Dragon. Shortly after the end of the last of the Tengu Wars a plague that turned beings into sickened, pulsating creatures known as Afflicted spread from Shing Jea Island to Kaineng City and even reaching into the Echovald Forest and the Jade Sea. Shortly after the appearance and spread of the plague the source was identified as the returned spirit of Shiro Tagachi and soon Shiro'ken appeared in large numbers with the Afflicted. Along with the threat of Shiro's return, the sources of the corrupted Wardens and the Outcasts were discovered in the forms of Urgoz and Kanaxai. 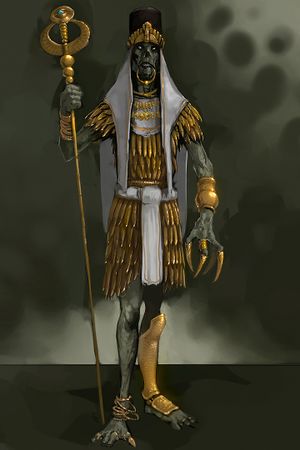 Palawa Joko invaded from the Desolation in an attempt to rule all of Elona.

Cantha is not the only land to be faced with a mass disease. The island of Istan was the origin of an insufferable plague from 452 AE to 456 AE. The Scarab Plague swept through Elona, left Istan abandoned, and wiped out the royal family of the Primeval Kings. Shortly after the end of the Scarab Plague, the bloodiest wars of Elona broke out as various factions sought to gain royalty. The Pretender Wars that ravaged Elona brought about the Shattered Dynasty Era, the end of which spawned the union between the three provinces which survives to this day.

Before the Scarab Plague and the Pretender Wars an order was formed by Queen Nadijeh to protect all Elona. Once called the Sunspear Guard, the Order of the Sunspears protects Elona without linking themselves to any one province. The Order helps the people of Elona whether through force or through support. Just as there are those who act to help others, there are those who act to help themselves. The pirating Corsairs act around and outside the law, keeping to their own Code of the Corsairs, sailing the treacherous waters around Elona. There have been times when the Corsairs were gathered together as a force, and not just as small groups, and both times this happened the Great Corsair Wars occurred. Little has been recorded about the First Great Corsair War but the second war entails of Lady Glaive gathering an armada to fight Seamarshal Matoha, before fleeing north and turning Istan into the maritime power of today.

A decade after Odran's infamous creation of the portals a new threat came from the Desolation to the northeast of Elona. The undead lich, Palawa Joko, came out of the sulfurous wastelands seeking to conquer all Elona. Having quickly forced the Vabbian princes to their knees, Palawa Joko turned his forces south and clashed with Turai Ossa's shattered forces. After 100 bloody days during the Battle of Jahai, Turai took his elite guard and the remnants of the Sunspears and took a twisting path to Palawa behind his armies where Turai defeated him in single combat, later entombing the undead abomination with his newly formed elite force. After years of ruling, Turai turned to books and prophecies. Believing himself to be a Chosen mentioned in the Flameseeker Prophecies, he took his people and traveled to the Crystal Desert to Ascend - an event now called the Great Pilgrimage.

In recent days, earthquakes have appeared throughout the three known continents, opening passages to long lost underground tunnels and threatening the major cities of Tyria. The threat was discovered to originate from creatures of stone and fire. The races of Tyria have been threatened once more by this new danger and in response to it, new races have appeared. The Asura have been chased from the depths and the Norn have been found in their isolated land to the north. But as new races are found, old groups fall. Ascalon and Orr have fallen, the White Mantle and the leaders of the Charr High Legions are threatened with the fall of their false Gods, the Stone Summit have scattered and a prophecy as old as the Dwarves themselves tells of the end of their race.

After the main threat of the Destroyers which decimated hundreds of lives, another threat appeared from the shadows. The Asura known as Zinn foolishly aided an unknown "mysterious stranger" and created three machines of immense power animated by an unknown energy source. The shady being ordered the golems to attack the royalty of Kryta, Cantha, and Vabbi. This "mysterious stranger" is still out there, and may strike once more.

Since then, the War in Kryta has become increasingly deadly. Despite their Gods reveal, the White Mantle still manage to keep its grasp on Kryta. Ruled by Confessor Isaiah, the White Mantle have increased its brutality through the use of Inquisitors and Peacekeepers, and still more Jade constructs and Mursaat are revealed as the war progresses.