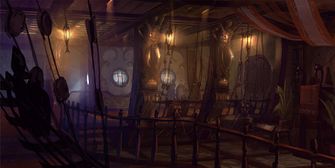 The Captain's Council (also commonly referred to as the Ship's Council) is the ruling body of Lion's Arch. They, along with the Commodore, wield all the power and authority in the city. As long as the council is free from the Commodore's influence, the two are roughly equal in power, and one cannot rule the other. The requirement that the Captain's Council exist was formally stipulated by Prince Edair in 1256 AE, when he agreed to recognize the sovereignty of Lion's Arch as long as the Council remain in charge.

The Council convenes aboard the Commodore's ship, the Pride. For the Captain's Council to make a decision, a majority vote by its members is required. Only captains and a "second" (usually their First Mates) may attend meetings. If a member of the Captain's Council retires or dies, their second takes their seat. If both are killed, then then one of the two circumstances in which a seat becomes open for purchase arises—the other is if someone proves themselves of exceptional value to the city. The number of seats on the Captain's Council is fixed at eight (although this was not always the case), and appointments to the council are subject to the following three requirements:

Other than that, anyone can become a councillor, in principle at least. In practice, such "approval" requires power, money, or influence.

By 1237 AE, the docks of Lion's Arch were bustling with trade ships, and though they weren't always the most reputable businessmen, they always paid their portage fees. Ships of every size and structure came through the Arch: shady dealers from Rata Sum, mercenaries from Ascalon, norn from the far north, and pirates of every stripe from cutthroats to vagabonds. The best of them, the wealthiest, had been offered a chance to invest in the port and join the Captain's Council, of which Councillor Cobiah Marriner was the head.

It was a tenuous situation at best. Money changed hands frequently, keeping the wheels of commerce turning, and the city had a thriving underbelly of illegal trade. The only person who'd stepped up to take the position of guard captain was a roaring drunkard named Mort Duserm, and the keeper of the biggest store in the city was a strutting, self-centred asura named Yomm. Each captain was expected to keep their crew in line, and they did, for the most part, but the disposition of the city was only as stable as the ships in the harbor—and every captain had his own idea of how "strict" he wanted to be in observance of the laws.

When something needed to be decided in Lion's Arch, the captains who had purchased a seat on the council were contacted. Those already in the port, or who could make it to the city within a week's sail, would gather to discuss and address the problem. Other than that, and arranging for the small roster of guards to be paid, there was little in the way of bureaucracy governing the settlement. The system had worked when Lion's Arch was little more than a handful of structures clustered around two long docks. But the town had grown. 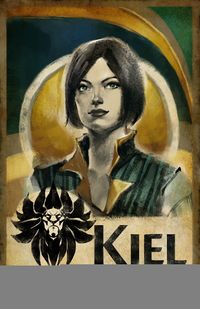 In 1326 AE, Councillor Theo Ashford of the Ascalonian Ashfords was killed when the Aetherblades attacked the Dragon Bash festival. His second had been killed earlier that year by the Molten Alliance, so a seat became open for purchase. The plan was that Captain Mai Trin would take the seat so that Scarlet Briar would have a representative on the council, but that plan was discovered and stopped by the Lionguard Inspector Ellen Kiel. Councillor Magnus Irondawn, impressed with his protégé, "recovered" Captain Trin's airship (which had originally been stolen from the Pact), making her eligible for selection.

The now-Captain Kiel was not the only nominee for the seat, however—Evon Gnashblade, owner proprietor of the Black Lion Trading Company, had also purchased a vessel, and wanted the position for his own. Around that time, the Bazaar of the Four Winds was converging in the Labyrinthine Cliffs. The Zephyr Sanctum was rumoured to be making an appearance, with whom the council had failed several times to make a trade agreement. Both candidates set out for the Deldrimor Front, looking to secure an agreement. Aboard the Sanctum, the Master of Peace only agreed to negotiate with someone who had popular support, and thus an election was held. Ellen Kiel was the victor, with 52% of the vote, and the support she had turned the tide with the Zephyrites. The trade agreement she secured impressed the Ship's Council, and Kiel was awarded the seat.

The next year, Councilor Kiel was given warning of the impending attack on Lion's Arch by Scarlet's Alliances. She attempted to warn the council, but they did not listen. When the city was razed by Scarlet's forces, Captain Gnashblade, seeing an opportunity to make the council take notice of him, fitted Heal-o-Tron with defensive upgrades.