The jotun (pronounced JŌ-tun) are the last remnants of an ancient society of giants. Once powerful, advanced, and arrogant, they proclaimed themselves rulers of the Shiverpeak Mountains and raised great monuments to themselves on the highest peaks. Their leaders, known as giant-kings, were tremendously powerful beings, as skilled in feats of strength as they were in magic and lore.

And yet, as the jotun defeated all who threatened their control over the mountains, they did not adjust to peace. Convinced that they were the superior race, they became obsessed with the purity of their blood and the number of heroes, warlords, and giant-kings in each lineage. Blood became a reason for taking one mate over another, seizing land, and in time, wiping out other "lesser" tribes. Eventually, the jotun conquered or destroyed all their external enemies, and then the giant-kings turned on each other, each seeking ultimate control. Families waged war upon one another, and brother made war on brother, until the tribes erupted in vicious internal wars for control.

"I will show you the jotun of ages past, when we strode across the Shiverpeaks as mighty lords. Witness the savagery, greed, and vanity that ended our glorious rule..."

Long ago, the jotun possessed the ability to use magic and were skilled enough with it to create enchanted monuments in the Shiverpeak Mountains. Some historians believe that the age of jotun magic may even pre-date the coming of the human gods and the creation of the Bloodstones. Yet, during their long history of infighting, civil war, and slaughter, the jotun lost all knowledge and understanding of magic. Their powerful sages were killed, and their lore-keepers and mystics were wiped out before they could continue the tradition of jotun magic. All that remains of their once-great arcane spirituality are a few carved runes on forgotten, snow-covered peaks. "See this stone, and behold the power that will one day conquer the world."

—— Written on a jotun monument

Over the centuries of their existence, the jotun have fallen far from their state of grace, losing command of technology and magic they once utilized, and remembering their place as kings of the land only in legend and story. While jotun leaders struggle to reclaim ancient glories and grasp lost power for themselves, most scholars believe that the glory days of the ancient giant-kings are lost forever.

The jotun have lost many of the things that once made them great. Their lore is scattered, and much of it lost; any religion, higher learning, or secrets of invention that they once mastered have been eradicated, and only the remnants of their once-great society remain. Like the massive stone monuments their people once raised that can still be found in the Shiverpeaks, the jotun have lost their purpose...and their meaning.

Now savage, vicious creatures, the jotun fall upon any traveler they see. Occasionally pacified by tribute and flattery, they may choose to let non-jotun pass with a threat or a beating. However, when two clans of jotun come upon one another, they are satisfied with nothing less than the complete eradication of the other. 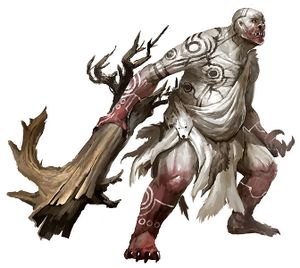 Jotun organize themselves into large tribes, related by blood or union, led by the strongest. This strength may come from arms, or magic, or any other ability—but it is always shown through physicality and brute force. The jotun do not respect a leader that is not physically able to enforce his laws and rulings. They would kill and replace anyone who lost their strength, failed, or did not lead the tribe to glory. A charr soldier may make a calculated decision to kill a failed leader in order to ensure victory for the warband. A jotun is more like a rabid beast, reflexively tearing one of their own to pieces at the first sign of weakness—no matter the long-term cost for the clan.

Jotun tend to segregate themselves by sex: males are more aggressive and take leadership roles, while females are relegated to childrearing. Males gather in small groups of blood-relations and constantly seek to eliminate any other jotun they discover in their clan's territory. At its heart, the jotun's internal warfare is intended to eliminate all those jotun not blood-related to a single clan. Because of this, it is critical for jotun to protect their females and children. A traveler will never see those in open territory, as the family unit is always well-hidden from the world while the males hunt and bring back food for all.

While many of the more "barbaric" races of Tyria have a sense of honor or a code of ethics, the jotun have very few moral restrictions inherent in their society. They protect and defend their family, their clan, and their territory through whatever means necessary. A jotun will break his word, lie under oath, or act reprehensibly if he feels it will empower him or strengthen his clan (or destroy another). Individuals who have attempted to make peace with jotun tribes in the past have learned, much to their sorrow, that jotun only stick to such treaties as long as they clearly benefit from them. It is far more likely that a jotun clan bound by treaty is only biding their time or building their strength, planning soon to eradicate those foolish enough to trust them.

The closest thing that the jotun have to "religion" is their firm, avowed belief that their blood is magical—that it is powerful, and akin to the divine. Each clan of jotun reveres their ancestors and can trace their lineage back to some powerful giant-king of lore. Many of the tales of these giant-kings have taken on the feel and tenor of religious myths, and each clan calls to their legendary blood to empower them, see them through trials, and ensure them victory. While it cannot be said the jotun "worship" their ancestors, they certainly attempt to emulate them through conquest, single-minded self-absorption, and personal pride.

Even though we had established the jotun in the original games, we wanted to really bring them to life in Guild Wars 2, particularly for the norn areas of the world. We wanted them to be more than "nasty customers with big clubs," and the way we chose to do that was to give them a long history—but a tragic one. We wanted to make the ogres an old race and follow that with the jotun, since the two species are interlinked. Giving the jotun a history that had been lost—ruined by their own flaws—gives them a lot of depth and plays into the overall story of Guild Wars 2.

The new jotun art depicts the race as being taller and more intelligent looking than the art from the original Guild Wars, which helps to better illustrate the race's history and the fact that they are sentient, smart creatures—not rock-tossing droolers. The primitivism we see in their clothing and weapons is a sharp contrast to the magical monuments located at their camps—and that, too, is deliberate. Showing the decline of a race from power and civilization into primitivism, all because they could not stop fighting amongst themselves, is important to the game's theme. It illustrates what might happen if the player character races can't give up their old arguments and unite against the threat of the Elder Dragons.