Tackle these challenging boss encounters in a group of up to ten players, either as a pre-formed squad or in a public mode anyone can join. 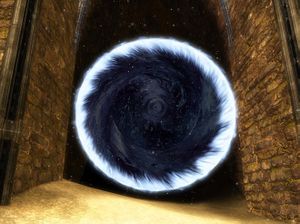 Portal to enter a strike mission.

Every strike mission will award you with prophet shards. These shards can be then used to buy ascended items from Crystallographer Smoxxi as well as exchange for crystals. Prophet Crystals then can be used to open Emissary Chests. 模板:Emissary chests rotation