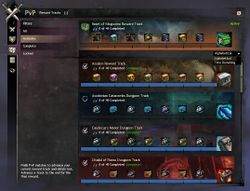 PvP Reward Tracks are Structured PvP goals that can be activated in the PvP panel. Each track has 8 tiers, each tier has 5 rewards.

Progress can be made in two ways:

There are several effects to increase the amount of reward track progress earned. These modifiers do not affect Potion of PvP Reward.

The skins rewarded by these tracks cannot be obtained anywhere else in the game.

Jungle rank reward tracks award Mordrem-themed versions of the default rank finishers. Players may only activate these tracks if they own Heart of Thorns and have reached the corresponding PvP Rank.

These tracks require Heart of Thorns to activate.

Dungeon tracks are available on a two week rotating cycle. Players can complete the story mode of the associated dungeon—or in the case of Arah, completion of Victory or Death or explorable mode—to unlock its reward track permanently. Any story mode completion prior to the introduction of PvP reward tracks in 15 April, 2014 will not count.

These tracks are only available for a limited period of time. They can be repeated indefinitely during that period.